The Institute for Science and International Security has analyzed open-source information, photographs, and videos of downed or captured Iranian drones used by Russian forces in combat operations in Ukraine, identifying parts and components produced or designed by Western companies. Information on the recovered and downed Iranian drones and the foreign parts and components identified in them is discussed here.

It is widely reported by multiple official sources in the media that Iran is supplying Russian forces with complete drone systems, infrastructure, and the required training necessary to operate the drones in combat operations. Iran continues to deny it has supplied any drones or arms to Russia, despite the overwhelming evidence to the contrary. These reports indicate that Russia, known to have also imported foreign goods for its own drones, is becoming increasingly dependent on imports to supply its combat forces with effective fighting tools.

Which Drones Have Been Supplied?

As of October 2022, Iran has supplied three types of drones to Russian forces. The Shahed-136 (Russian designation: Geran-2/Germanium-2), its smaller version, the Shahed-131 (Russian designation: Geran-1/Germanium-1), and the Mohajer-6. Media reports indicate that Iran has agreed to supply the Arash-2 UAV to Russian forces, and in the future, potentially short-range surface-to-surface ballistic missiles, such as the Fateh-110 and the Zolfaghar. The embargo on Iran’s ballistic missile exports ends in October 2023, as stipulated under the Joint Comprehensive Plan of Action. With the impending end to the ballistic missile embargo and the failure to renew the UN Arms Embargo that expired in 2020, Iran will be free to continue to sell its weapons to Russia and others.

Open-source information, including videos of captured or downed Iranian drones, reveals foreign commodities as the key components in the Shahed-136, Shahed-131, and Mohajer-6. Many of the commodities are aircraft parts from Western companies; other parts are Chinese or Iranian copies or re-designs. A list of the identified aircraft parts is found in see Table 1.

Figure 1. A screenshot of the Shahed-136. The Shahed-131 is identical in shape, although it has a smaller wingspan.

The Shahed-136 and its smaller version, the Shahed-131, are kamikaze-style drones, able to loiter before striking a target with payloads of roughly 40 kilograms (kg) and 10 kg of explosives, respectively (see Figure 1). Both aircraft are manufactured by the Iran Aircraft Manufacturing Industrial Company (HESA),are made of composite materials, and are driven by a two-stroke gasoline propeller blade engine. Both drones are launched via a catapult system either from the ground or in pre-filled containers from the back of a flatbed truck using an ejectable rocket assist system. The Shahed-131 has a range of less than a thousand kilometers, while the Shahed-136 has a range of a few thousand kilometers, meaning they have the ability to reach any target in Ukraine depending on the launch site. The purported cost of these drones is between $20,000 and $30,000 a unit.

Shahed-136 UAV Engine. Images of downed Shahed-136 drones show that it contains an MD550 engine that appears to be based on a model aircraft engine, the Limbach L550e, designed by Limbach Flugmotoren GmbH & Co.KG, a German aircraft company. The MD550 is produced by the Chinese company, Beijing MicroPilot Flight Control Systems, based in Beijing, China. The MD550 is identical in design to the engine produced by Limbach. The MD550 is estimated to generate 50 horsepower and is powered by gasoline. The engine is an off-the-shelf part that is commonly used by civil aviation enthusiasts.

Iran has a long history of illicitly procuring Limbach engines for its drone program. In 2012, Limbach opened a subsidiary in China, Xiamen Limbach Aircraft Engine Co., Ltd., to produce the L550 series and other engines. It is unclear how Beijing MicroPilot Flight Control Systems obtained the design for the L550 series engine, or if Limbach or its agent sold the design to the company under a license.

Figure 2. The website for Beijing MicroPilot Flight Control Systems lists the YZ-6 and the TD-2000 as two of its products. The UAVs have designs similar to those of the Iranian combat drones operated by Russian forces in Ukraine.

Under its product page for UAVs (see Figure 2), the website for Beijing MicroPilot Flight Control Systems lists two aircraft called “YZ-6” and “TD-2000,” which appear to have similar designs to the Iranian Shahed-136/131 and the Mohajer-6.

Shahed-131 UAV Engine. The Shahed-131 drone contains an Iranian redesigned engine, the Sorat-1/Sorat-2, that appears to be based on a Chinese design, the MDR-208, which in turn is based on a British aircraft engine design, the AR731, produced by UAV Engines LTD. The Sorat-1/Sorat-2 has been displayed at aviation expos in Iran and is listed as a product produced by MADO Company, an Iranian UAV component manufacturer. The engine has less horsepower output than the engine used in the Shahed-136, giving it less range and payload capacity. 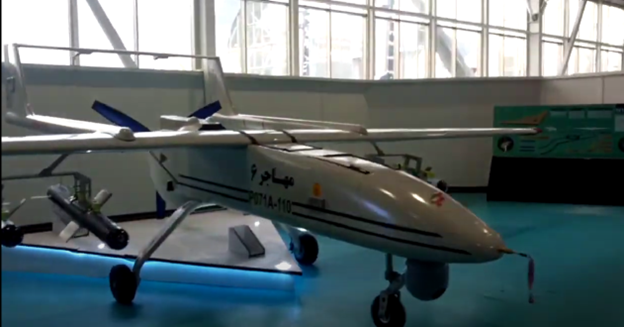 The Mohajer-6, first unveiled in 2017, is an ISTAR (Intelligence, surveillance, target acquisition, and reconnaissance) drone with a maximum range of 300 kilometers, although it is also equipped with four precision-guided missiles. This drone is produced by the Qods Aviation Industry Company (QAI). Russia has operated this drone in Southern Ukraine and the Donbas region. The aircraft has the capability to provide in-real-time video footage of the battlefield to artillery units or other relevant combat missions. The aircraft is suspected of having electronic jamming capabilities. It is launched and recovered via a runway using its fixed tripod-wheels.

Mohajer-6 Engine. Images from media reports indicate that the engine used in the Mohajer-6 is a Rotax brand 912 IS Sport aircraft engine produced by the Austrian company, BRP-Rotax GmbH & Co KG. The engine has an output of 100 horsepower and is powered by gasoline. The engine is popular in civil small frame aviation.
Selected Part List of Identified Aircraft Parts Produced or Designed by Western and Chinese Companies 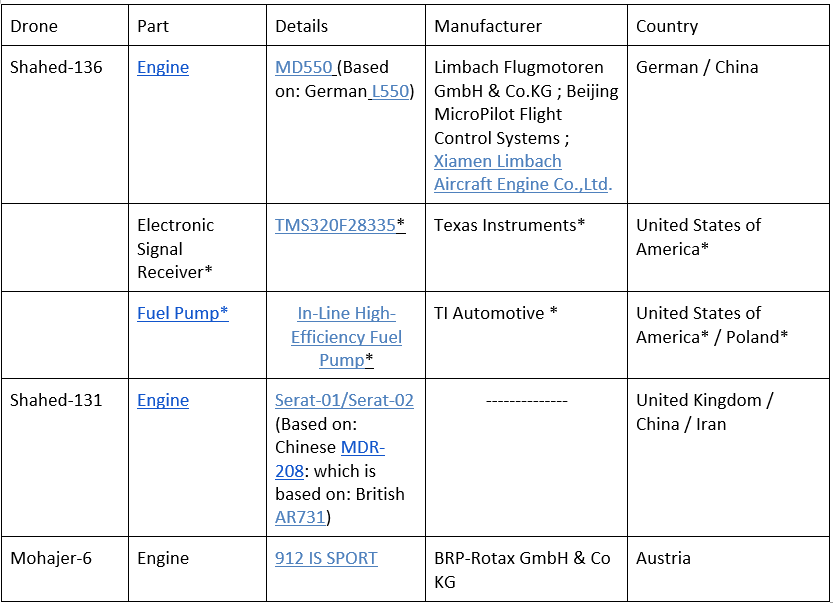 Table 1. The Western designed or made aircraft parts identified as components in the Shahed-131, Shahed-136, and the Mohajer-6 Iranian drones. *Information reported by reputable media sources.
(See PDF for hyperlinks in table.)

Many of the Iranian drones deployed by Russia against Ukraine have been used to kill innocent civilians and target Ukraine’s civilian energy infrastructure, leaving many poorly prepared for winter. Moreover, Iran’s sales to Russia are a violation of the missile embargo under United Nations Security Council Resolution 2231, the resolution that established the JCPOA. This violation is made worse because Russia is both a member of the UN Security Council and a party to the JCPOA, and it agreed to UN Security Council resolution 2231. Iran’s supply of drones to Russia demands strong international responses.

One immediate action is to acknowledge that a revival of the JCPOA should not occur unless Iran stops exporting drones and Iranian drones are no longer used in Ukraine. The people of Ukraine who are suffering such grievous losses from Iranian drones deserve no less. It is important that the E3 and the United States come together on this issue and ensure that Iran does not receive the substantial rewards of a revived JCPOA while it violates UN Security Council resolution 2231 so grievously.

Given the seriousness of the situation, another priority is reviving the UN arms embargo, which expired in 2020 and spurred Iran’s sale of drones, and the reaffirmation and prevention of the expiration of the missile embargo next year. The international community needs additional tools and international legal standing to expose, prevent, divert, or seize Iran’s exports of arms, drones, and missiles.

For more recent analysis on Iran, visit the NuclearIran website ›

The Physics Research Center in Iran ›

The Institute's Resources on the Stuxnet Worm ›